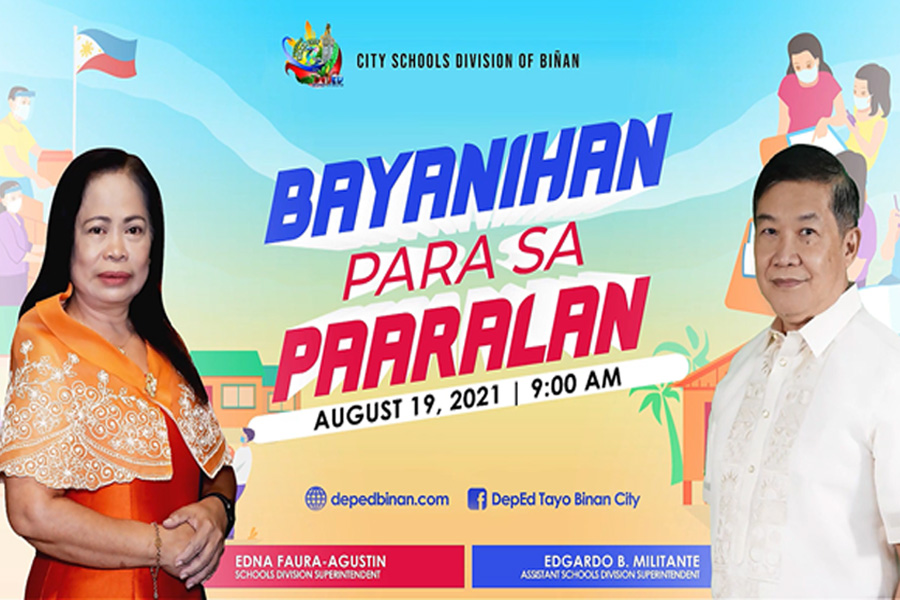 ON AUGUST 19, 2021, the City Schools Division of Binan City conducts its virtual Brigada Eskwela with the theme, Bayanihan para sa Paaralan. The activity, hosted by the Social Mobilization and Networking Section via Streamyard and Youtube, was participated by 691 viewers, with 38 schools of Biñan, and personnel from the Division. The program started with the Division’s National Anthem, prayer, CALABARZON March, and Biñan Hymn.

Statement of purpose was delivered by Undersecretary for Legislative Liaison Office, External Partnerships Service and Project Management Service: USEC. Tonisito M.C. Umali, Esq. He explained that the focus of Brigada Eskwela this year 2021 is to strengthen partnership engagements towards DepEd’s implementation of the Basic-Education Learning Continuity Plan and the continuous delivery of services to its stakeholders. He also mentioned Brigada Pagbasa as the highlight for 2021 Brigada Eskwela.

One of the highlights of the activity is a meaningful discussion on Resiliency which was facilitated by Resource Speaker Sir Hector T. Villegas Jr, a Sustainable Development Affairs Unit Program Consultant of Office of the City Mayor, Quezon City Local Government Unit and Quality Assurance and Quality Control / Chief Safety Officer of Southbend Management Services Inc. He mentioned the importance of resiliency and sustainability in the workplace. He reminded participants on valuing safety and health in daily work whether be it in a work-from-home or on-site reporting arrangement.

The program was made more exciting by the “CHALLENGE FOR THE DAY”. Everyone were encouraged to share their own meanings of “Bayanihan para sa Paaralan” and whoever gets the top 3 best explanations of the theme will get a prize of Brigada Eskwela Polo Shirt, Pins, Mask, and Alcohol. During the last part of the programme, Ms. Joyce Cabantog announced the following teachers with the best versions of “BAYANIHAN para sa Paaralan”: Ma’am Marwin Andam, Ma’am Charlene Esmeria and Sir Paulo Isabelo.

The annual kick-off ended with a pledge of commitment led by the School Governance and Operations Division Chief, Dr. Bayani V. Enriquez, and with the message of thanks by the Assistant Schools Division Superintendent, Sir Edgardo B. Militante. He expressed his gratefulness for the participation of parents, community and other stakeholders in different DepEd programs, projects, and activities that aimed for better quality education for learners. He considered everyone as HEROES as they continue to help schools in providing education to learners.

The City Schools Division of Biñan City believes that through collaboration, engagement and volunteerism, SUCCESS is POSSIBLE.

This website is owned by DepEd Division of Biñan City which will communicate and engage the community and other stakeholders on the advocacy, programs and projects of the DepEd Organization. We strive to keep everyone informed and updated Thank you.